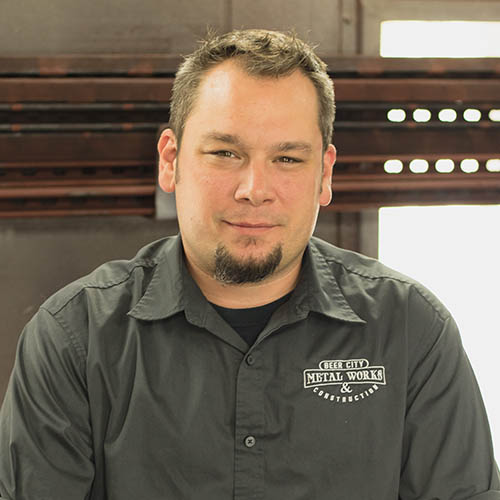 Randomness: James once saw Lee Van Ameyde walking out of a gas station in Cutlerville, loves spending ridiculous amounts of money on fly fishing gear despite being absolutely terrible at fishing, enjoys tormenting his wife and two kids with dad jokes, and has a three legged yellow lab named Lucky. He strongly recommends not naming your dog Lucky.

James is the “old guy” out of the group that manages the fabrication shop, and dreams up all of Beer City Metal Works & Construction’s pretty designs. He has had a life-long interest in art ranging from drawing to modeling to whittling, and everything in between. He started off as a truck mechanic, but discovered that welding and fabrication was his true calling, and has spent the last 15+ years as a welder/fabricator. James loves tinkering, and has been called a “Jack of all trades” more than once. He is an avid SketchUp addict, which he taught himself to use to build a playhouse for his children. Despite how awesome it was they used it twice, but the neighbor kids love it.